Back on this supper club exploration of mine, this time at Arno Maasdorp's Saltoun Supper Club. I'd dutifully read all the other reviews and had somewhat high hopes for this one as the unforgiving, harsh but absolutely spot-on and fair food critic Jay Rayner reviewed it last year. Past stints at Loungelover and Les Trois Garcon came through in Arno's kitch and eclectically decorated home in Brixton. One wall covered with woven baskets, across another which was a mosaic of household items, dried insects, dolls and bric-a-brac. All intentfully arranged to create a cosy, playful and personal surrounding to the dining experience. 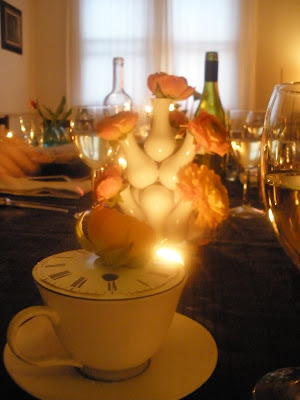 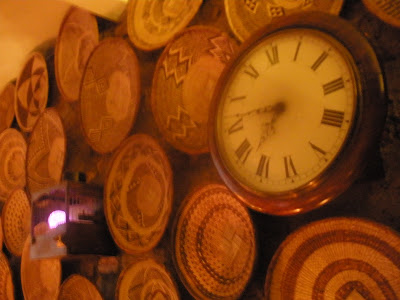 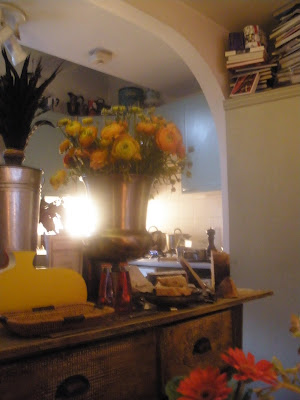 And so how was the food? Restaurant quality. It had all the swooshes, purees, blobs and dots of a top notch place. Each course was very filling (Hungry Female felt about 2 years pregnant with a baby elephant after all five courses) and had multiple elements that made unique and new food ensembles. 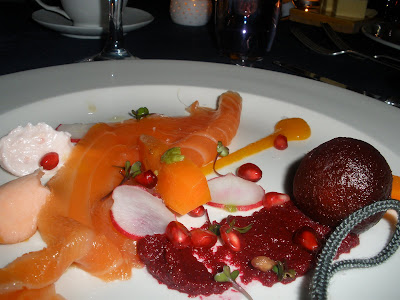 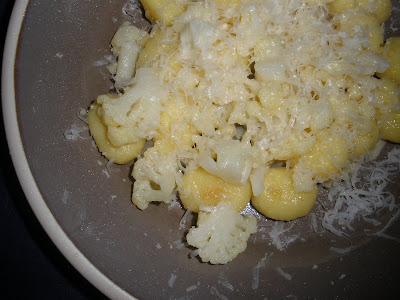 Truffle Infused Cauliflower Gnocchi. This is what probably caused my overdue food pregnancy. Topped with loads of parmesan, I couldn't resist the little clouds of pasta that made their way into my mouth until the whole plate was clean. Cauliflower has an almost sweet taste when cooked that goes so well with earthy truffles. 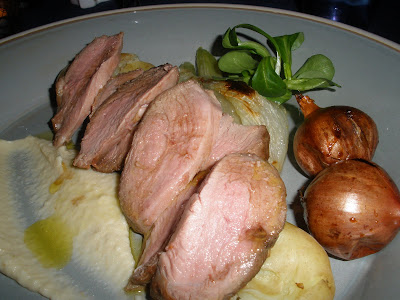 Roasted Duck. Hello Lover! Really tender duck with a celeriac puree, roasted onions and shallots. Couldn't get enough of the duck with the concentrated sweet onions. We were astonished by the portions and the ease in which Arno seemed to roll out these culinary feats from his home kitchen. 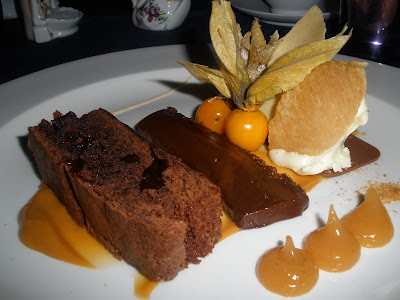 A Chocolate Plate. One of the most rich chocolate tortes and ganaches I've eaten. Despite it being gooey and that my throat felt coated by the dark gold, again I found it hard to resist. Beneath the chocolate was a caramel sauce and with regret I cannot remember what those Hershey shaped blobs are. How all these   sumptuous sweets are all on one dish but that the overall result was not sickening is real genius. 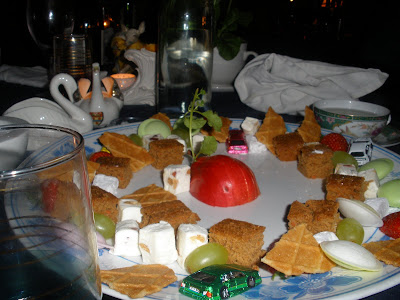 Petit Fours. A quirky, random but adorable platter of ginger cake, chocolate cars, flying saucers and marshmallows put a smile on our faces. You can bring top restaurant food to the home, but you'd never bring humorous touches like these to a top restaurant. At least not the ones with puree swishes.
When the meal ended, Arno came over to chat. When asked why he wanted to have an underground restaurant in his house, he replied with "I wanted to do good home-cooked meals". Well Arno, you and I clearly live in very different homes! Bravo!
A minimum donation is £30 per person and is BYO.
Posted by Hungry Female at 10:58 PM No comments:

When life gives you lemons, you must be on the Amalfi Coast. The best thing about Italy is how it's simplicity is it's true sophistication: as cliche as it is, Italian food is all about quality and in wonderful quantities. I've always wanted to go south of Naples to the lemon filled terraces of the Sorrentine Peninsula, home to limoncello, spaghetti alle vongole, parmigiana di melanzane, frittura di pesce and other Neapolitan classics. We packed our bags and appetites over the Easter Bank Holiday and visited Sorrento, Amalfi, Ravello, Capri and Naples. What jet-setters! Or rather bus-hoppers as that is how the locals commute to get around the bendy coast! After an elimination as difficult as the annual Masterchef finals, here are the highlights... 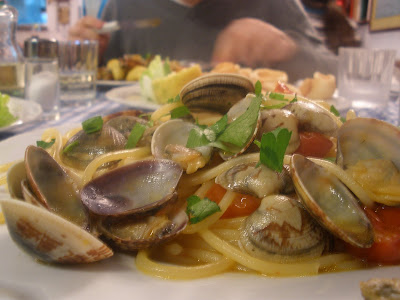 Sorrento: Spaghetti alle vongole, or quite simply Spaghetti with Clams. A simple sauce is made after cooking garlic, olive oil and cherry tomatoes and mixed with clam juice or sea water, it becomes a tasty seafoody emulsion to coat that perfect al dente pasta. 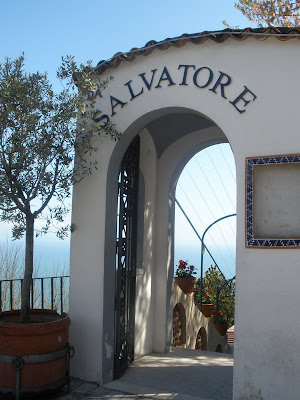 Ravello: The charming and exquisite Da Salvatore restaurant perched on a cliff with jaw-dropping views of Amalfi beneath. A meal for two with half a bottle of wine was 65 euros, an absolute bargain for what we had. 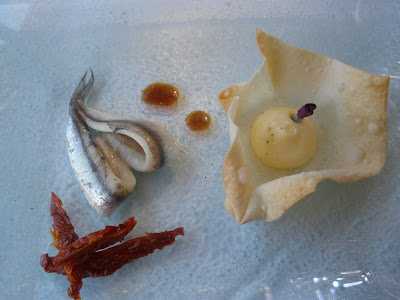 An artistic amuse bouche of pimiento, anchovy (which was so fresh it was near raw), vinegar and tartar cracker. 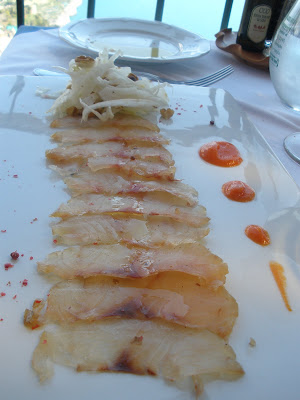 Smoked grouper with a fennel and walnut salad, accompanied by a blood orange jus. The orange jus was so incredibly sweet and perfectly reduced, and married so well with the smoky grouper. Ricotta gnocchi tossed with porcini mushrooms, with buffalo cheek stewed with vegetables. Porcini mushrooms so soft but yielding in their earthy flavour, their texture was almost like roasted aubergine. The buffalo cheek was tender and marbled, with slight hint of pimiento heat from the vegetable stew. A new and awesome flavour combination. 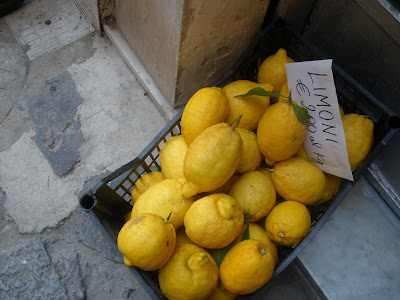 Ah, il limone! Endless yellow ovals dangle from trees on staggered terraces all around the coastline, to add zest and tang to cakes, sauces and fashion the infamous limoncello. Hundreds of bottles spill out from touristy stalls, and very often next to it is it's lesser known cousin, meloncello. Admittedly, sometimes the orange hue borders on neon but it's not half as scary and actually more drinkable than limoncello. 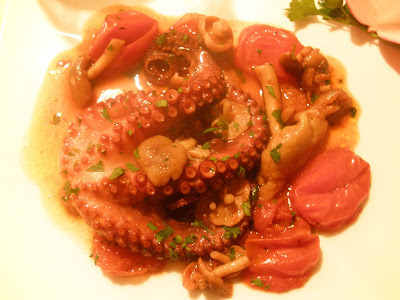 Naples, oh vainglorious Naples! Filthy and frantic on one street and overwhelmingly grand on the next. We arrived here on Easter Sunday to find most restaurants closed. Perhaps a school child's error being in Roman Catholic Central on a key date in the Christian calendar, but La Cantina del Sole in the Old Quarter was a wink from above. It was your quintessential small Italian outfit, run by only a few staff, with plenty of charm. The dish that stood out was the octopus, mushroom and tomato starter: I can sincerely say to never have eaten octopus as fresh as this and for it to come as it did! Up to now, those suckers have always been chopped up and hidden amongst other herbs. The meat was softer than squid, not chewy and interesting to be pared with mushrooms. Kinda like the sea and forest coming together? 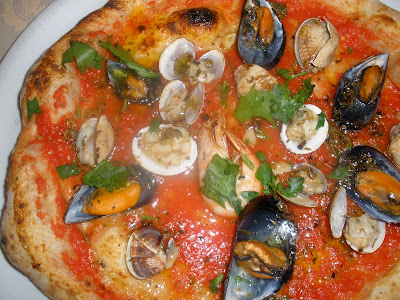 And finally, la pizza. Naples' most famous export was truly best saved for last. Again, I risk the cliche but it is just crazily fresh and simple ingredients in abundance which sum up the Italian kitchen. The real deal is not a thin or thick crust but somewhere in the middle, and for what I could see, how good the pizza oven then was to singe and bake this to perfection. All pizza bases have this whiff of garlic that brings it all together. There are endless pizzerias on every corner of the city, but the one we tried and loved was the Antica Pizzeria del Borgo.

All you need in this part of the world is lots of appetite and time to eat your way through. Oh and to work it all off, a hike up Vesuvius or wonder around ancient Pompeii. Buonissimo!
Posted by Hungry Female at 6:33 PM No comments:

The Black Lion in Kilburn was always one place I was keen to try mainly to sit in its ornate and wonderfully preserved rooms. A silly reason really to choose somewhere to eat but it's a sort of oasis in tatty Kilburn. Don't get me wrong, there are some excellent value for money places all along Kilburn High Road, most of which I would strongly recommend despite the less glamourous settings. I hoped this place would offer some of that. 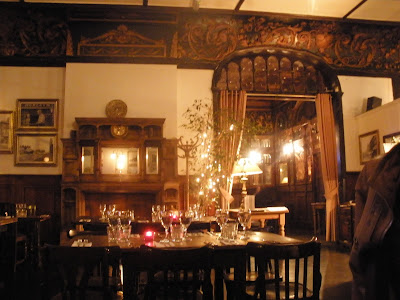 You enter into the pub and immediately are struck by the black walls and ceilings that are wonderfully carved and decorated with gold paint. Panels around the room have embossed figures in a variety of poses and scenes that curiously suggests some significance of this pub in the area. Unfortunately I could not dig up much online and from its website, a shame considering there aren't that many pubs in London which look as impressive.

We came to try the dinner menu deal that was a no-brainer: 2 courses for £9.95 on selected a la carte items. By no means was this fancy even with our surroundings, but their descriptions appeared to be written with enough care to convey effort. 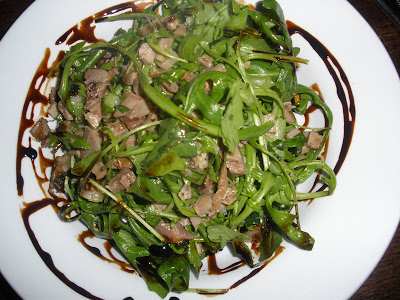 Boyfriend's starter was flaked roast duck salad with a hoisin sauce on top rocket leaves. My prejudice for the unoriginal duck and hoisin partnership was challenged when the sauce came as a reduction of hoisin and balsamic vinegar. The duck was nicely seasoned and rather enjoyable. 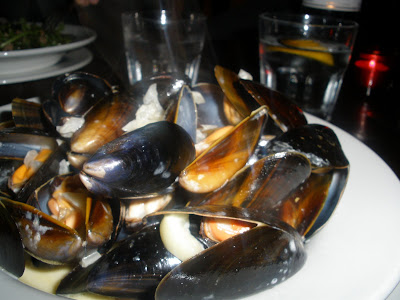 My moule marinieres was fairly standard. The creamy sauce with wine, celery and garlic, was rich and buttery and coated the generous portion of mussels nicely.

Now enter the mains. Whilst bountiful, the composition of both dishes lacked forethought. There were rogue vegetables in both dishes, like a single mangetout that had infiltrated my broccoli (which was undercooked harrumph) and cherry tomatoes that didn't really need to be there. Hearty and rustic are adjectives I'd love to use, but let's have some graciousness pur-lease. 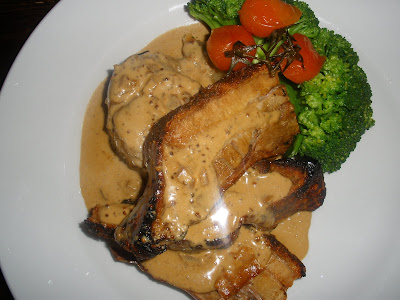 And here is where I came close to whining out loud: flavour-wise my pork belly was actually decent, and a fairly becoming sauce, but the crackling was burnt! Burnt to the point which it was bitter and inedible. Burnt cracking = a very unhappy Hungry Female. 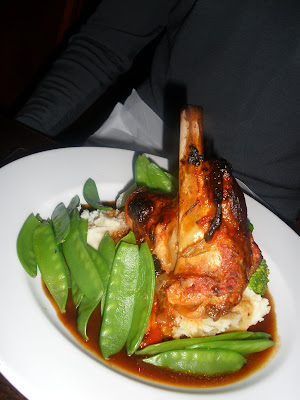 BF's main of lamb shank was more successful, at least a prettier plate and big flavours.
All in all, a pity that the room doesn't come with food that matches it's opulence. I would have been even happier to pay more if it meant the dishes had been served with a little more care. Service was prompt and pleasant.
Posted by Hungry Female at 9:42 PM No comments:

Email ThisBlogThis!Share to TwitterShare to FacebookShare to Pinterest
Labels: Kilburn, London, Modern European, The Black Lion
Newer Posts Older Posts Home
Subscribe to: Posts (Atom)
"If you are what you eat, then I only want to eat the good stuff."~ Remy, from Ratatouille.