Huck's Cafe, a KL supperclub. Could we go deeper undergound?

In London, underground supperclub dining used to be a solely secretive dining experience. Amongst the longest running ones are Ms Marmite Lover, Fernandez & Leluu and the Saltoun Supper Club, who after humble beginnings are now enjoying being booked out and celeb status in foodie circles. There is now a teeming community of supperclubs across the UK's capital, many with impressive and unique menus.

This trend is also popular in the States, Australia and more recently in Hong Kong. Starting your own supperclub is simple, at least in the UK where there are no regulations to serve food in your house and invite (often) complete strangers to dine. Practically all are BYO and will suggest a minimum donation to at least cover costs. For discretion and hinted exclusivity most clubs only send out the address the day before dining and most don't disclose the menu till the night itself. The idea is to delight in the surprise and be adventurous with other like-minded foodies.

I was thrilled to find Huck's Cafe in KL, happy thinking that we had embraced clandestine dining like the rest of the world. How would a Malaysian interpret the concept and what would the menu be like? Quite different from my expectations and from what I had experienced of supperclubs as it turned out. 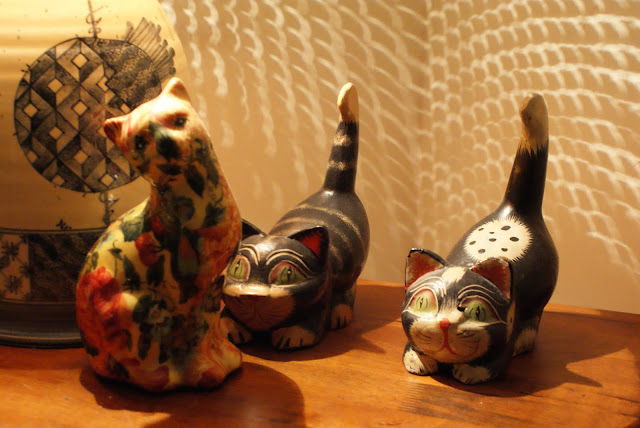 Run by Huck Seng, Huck's Cafe has a large and loyal following on Facebook and is clearly comfortable with displaying lots of information about his supperclub there. The address, his contact details, the menu, accompanied by scrumptious looking pictures were all readily available. I felt knowing so much about it upfront may have taken away the element of intrigue.

Situated in Gasing Indah, the venue is a grand almost stately three-storey bungalow. The curvy branches of frangipani trees create a natural screen from the gate; candles and a soft spoken waiter led us to our table from outside. Wow factor? Fo sho. 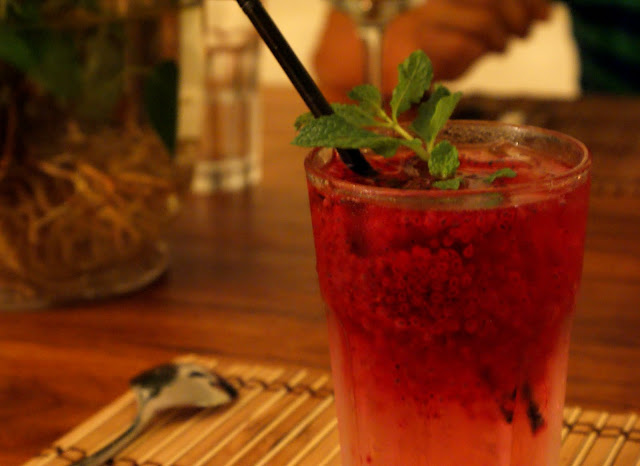 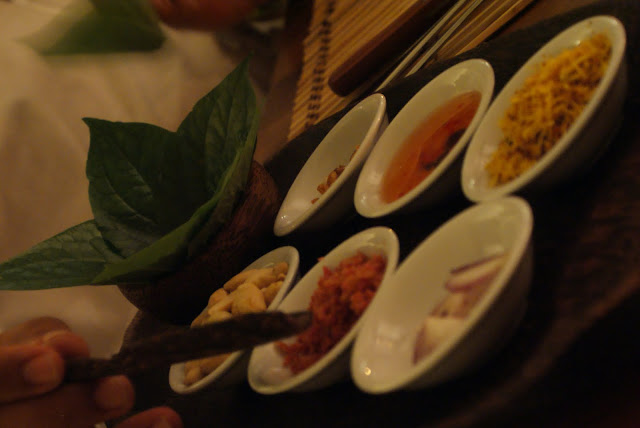 Immediately directed to our table of five, there's little in the way of a welcome or offer to be shown around. So we decided to take ourselves on a tour. Our table was on the inside, the rest outside on a wide balcony. We're surrounded by atmosphere and taste, and satisfied with air-conditioning, soft music and Balinese style decor on the inside.

The welcome drink looked fantastic. Bright red, it's a basil seed mint soda. The basil seeds were like tiny sago balls in bubble tea and it made me think of ice cream soda. This was swiftly followed by Miang Kam, a popular Thai style appetizer where a selection of fresh tidbits are rolled into a wild betel leaf. Our tasty melange consisted of fresh shallots, roasted peanuts, dry-fried dessicated coconut, sambal, Thai chilli sauce and dried shrimp. 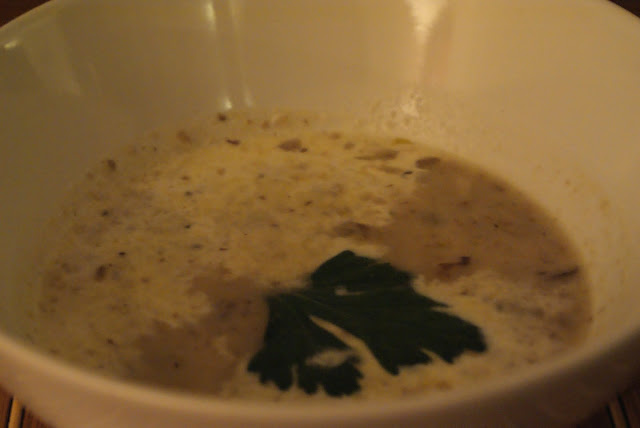 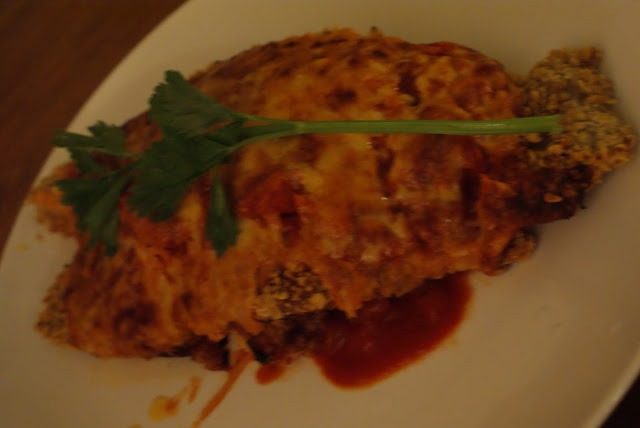 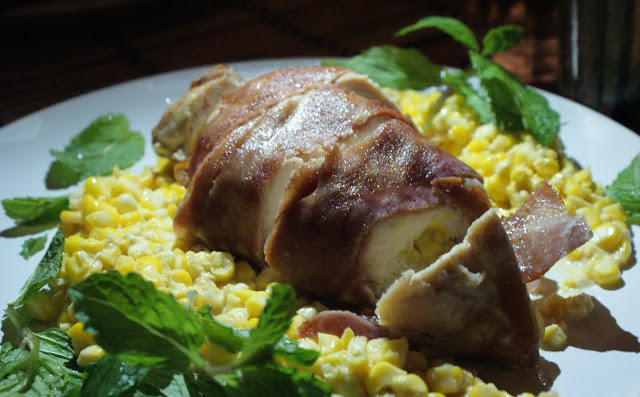 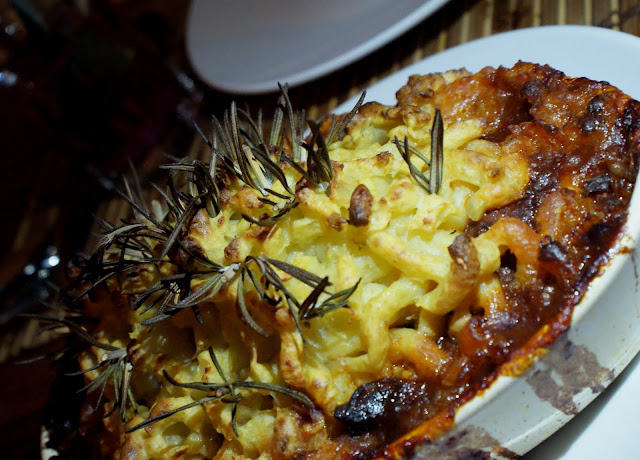 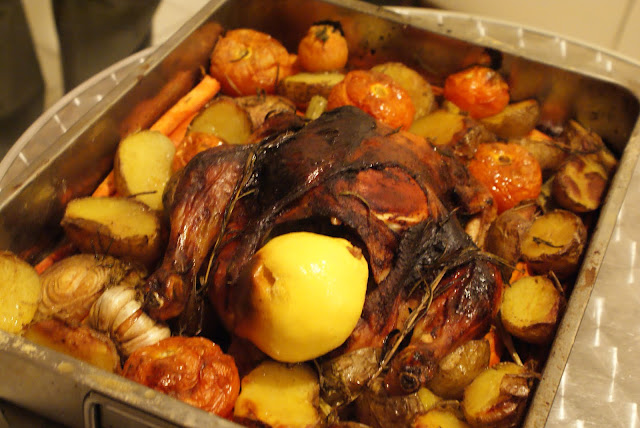 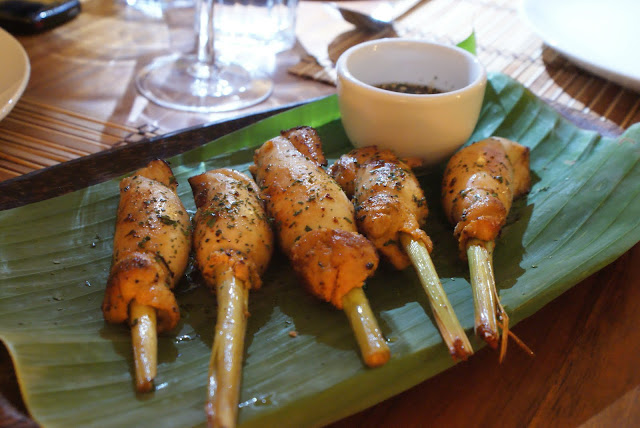 Main courses descended on us rapidly: there was a breaded fish fillet on top tomato spaghettini, baked with cheese, chicken breast wrapped in beef bacon stuffed with banana accompanied by a sweetcorn mash, Shepherd's pie topped with macaroni mash, studded with rosemary and roast chicken. Are you thinking what I'm thinking? It's almost as if I was back in London with this menu. The only Asian main was a grilled squid stuffed with otak-otak (spicy fish paste) and skewered on a lemongrass stick. Partnered with a chilli padi dressing it was cooked through without being chewy and a clear favourite. I couldn't help but feel a twinge of disappointment. Was I naive to have hoped we'd be dazzled with more excerpts from our rich Malaysian repertoire? 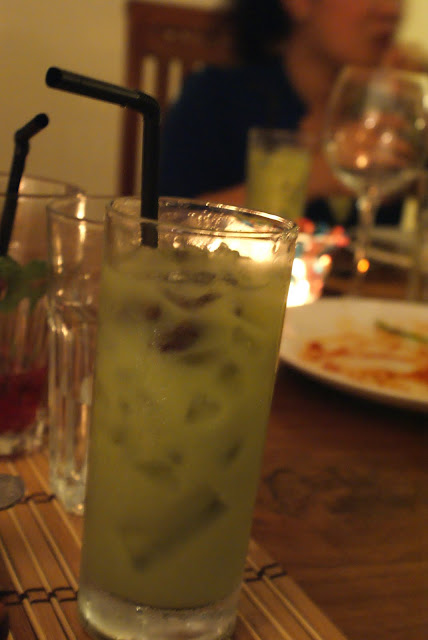 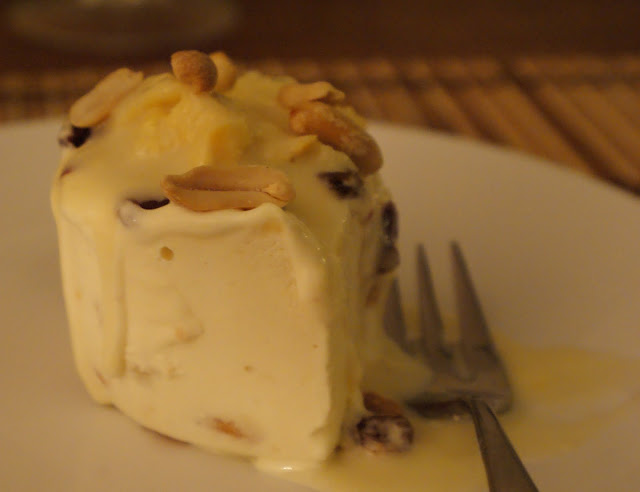 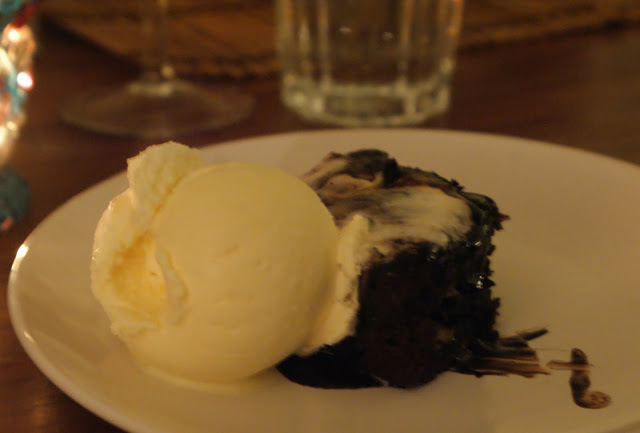 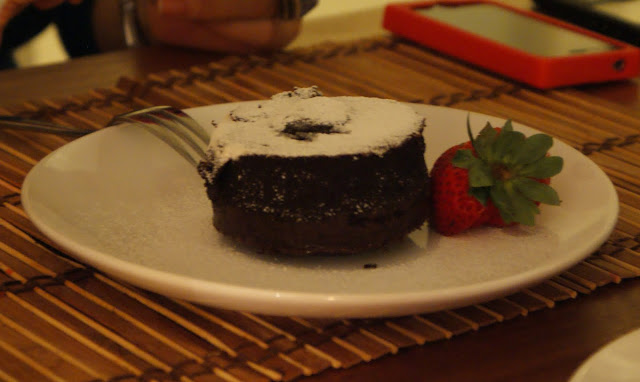 Onto desserts and it's deja vu. Again anything remotely Asian amongst a chocolate brownie, creme brulee, a molten lava cake - basically a chocolate fondant by a fancier name - is a durian mud pie. Strictly speaking it was durian flavoured ice cream with a crumble base but at least an attempt at experimenting with the norm. We finished off the meal with a closing drink, sour plum juice which was sweet, sour and salty all at once. Made from a local plum which is cured with salt and tamarind and mixed with soursop juice, its a perfect palate cleanser. Cups of black coffee were served at the end.

Before I get grossly misunderstood, I genuinely thought this was competently cooked homestyle food. Huck is a skilled cook and has clearly been trying out his variation of classic dishes. I adore a good roast chicken but in all humble honesty it doesn't make for an exciting menu on par with the captivating settings. Call it my  imaginary bias but our table of diverse palates were unified in liking his Asian fare.

Whilst not in Huck's vision, I still have hope for a Malaysian supperclub that draws inspiration from what Malaysians do best with food and takes it to the next level. Plus, a little mystery doesn't hurt if it's a supperclub you're running. Otherwise it's a restaurant in a house which KL has plenty of, cue Jarrod & Rawlins or Courtyard in Damansara Heights.

Then again, maybe it's just me in the minority with my hopes. Huck's cafe gets fully booked on weekends, has a large fanbase and plans to move into a larger Bangsar premise come July 2011. The full menu including non-alcoholic drinks is RM88 per head.

Beautiful words and pictures. I do not see much light of Supper Club in Malaysia, like Huck's. The government does not understand it, the neighbour hate it...Heard he moved to city by no choice. His neighbour reported to MPPJ. One the other side, Selangor state has launched a Food blog competition to promote Selangor Food Tourism. Buy why they are chasing Huck's away?

Hi there! Thanks for visiting. It's interesting what you say, I'm still trying to figure out what can and can't be done in this scene here with regard to regulations. Are you saying that the WP state would be ok with his supperclub and not Selangor?

Yikes, I always do wonder what the authorities make of these underground supper clubs.

I did hope that this one did feature Malaysian home cooking but come to think of it, most Malaysians get that at home anyway! I guess it's understandable that they want home-cooked international food!

Hey Su-Lin - agree with you re international vs Malaysian home cooked food. I was just really impressed with his Asian dishes that evening which weren't run-of-the-mill Malaysian and thought he could have played to his strengths a bit more. But hey, the menu changes next month...! Shu x