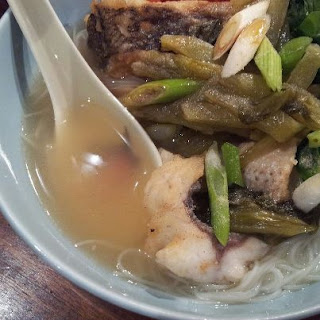 Lately I've been hit by desperate cravings for homely noodle soups. I'd like to think my desperation would make me unfussy, that hunger trumps putting myself through inconvenience. Wouldn't it just be fine to make up some soup through stock cubes, toss in noodles and fillings? Nope, that's not how us noodle lovers roll. I of course had to make everything from scratch and traipse around London for the "right" ingredients. But then I wouldn't have discovered some very interesting details about one of my childhood favourites, Fish Head Rice Noodle Soup.


Characterised by its thick, white broth and unique of Cantonese Chinese cooking in Singapore & Malaysia, when done properly this dish transcends. Not as indulgent as a lubricious ramen stock though neither as cleansing as clear consomme, its milky emulsion that is rich in fish flavour has both body and subtlety in perfect parts.

Delighted to find this illustrative recipe on Mummy I Can Cook's, the mention of how the broth can be made naturally milky by bringing fried fish trimmings to a rapid boil caught my eye. Oh. I'd always though it was achieved by adding evaporated milk but apparently that is the cheat's way. Whilst not meaning to doubt Shu Han (she also runs a supperclub, she also draws, she too makes sambal, plus is another Shu so there must be truth in this) this triggered some research. Most recipes say to add milk, and most of my Malaysian comrades were surprised that I hadn't (public sentiment via Facebook comments is all that matters right?).

Au contraire. Subsequent findings confirm the way to do it is by making sure there's enough wok hei  i.e. your pot is hot enough when frying off your ingredients, adding in hot water to quickly bring it to a rapid boil. This then breaks down the collagen within the fish head, producing the milky soup. My first attempt didn't quite turn out so milky, but there was a definite opaqueness to it and taste wise was lovely. Using seabream was perfect (it's a naturally tasty fish and just needs salt and white pepper as per the recipe) and I adapted it by adding preserved mustard greens to the stock and a splash of regular brandy just before serving. Oh yeah.

It probably is a question of taste to whether you like it au naturel of if you're used to having it with a dash of milk. I'm rather smitten by the former so will be experimenting with the above method going forward. I'm still very curious to find out what you think: with or without evaporated milk?

P.S. Thanks Mr Noodles & I Am Feeder for noodle consultancy on demand!

Posted by Hungry Female at 5:39 PM