North Road is the Farringdon branch of sister restaurant The Fig, which I felt never received the acclaim it deserved. Not that I wanted anyone to know, I was rather happy to keep this rare gem to myself. Located in leafy Barnsbury, it is the bistro brainchild of Scandinavian chef Christoffer Hruskova, who cooks the best British ingredients with a Nordic accent. So upon hearing there were plans for a new beefed up branched towards the City, I was certain that it was more about getting bums on seats than concentrating on superb cooking.

Very unlike the cosy, rustic 20 seater set in a neighbourly house, North Road was as chic as a whitewashed runway at London Fashion Week. Bare bulbs hung from the ceiling in minimalist fashion and the atmosphere was near starchy. For two minutes I was almost scared. Had the kiddy gloves come off to reveal newly sharpened talons?

Having been offered 50% off the menu as a “friend” (these friends come easy, simply stick yourself on the mailing list!), the five course tasting menu was the obvious place to start. 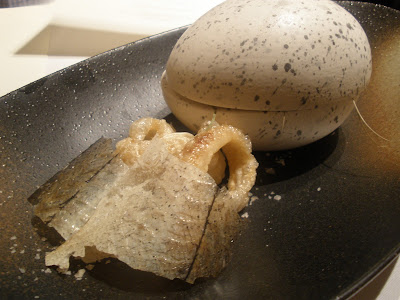 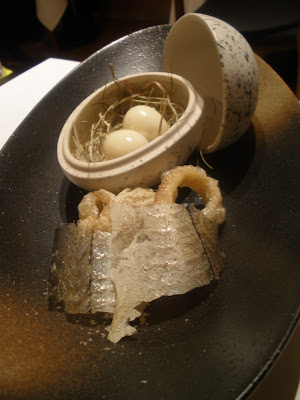 Like all restaurants coveting a Michelin star, up first is the amuse bouche. Fried pork crackling twisted into pretzel shapes, served underneath fried fish skin was a welcome opener for me considering this is very Chinese, and us Chinese love our crackling. Next to the  skins was an egg “container” which required us to open the lid to reveal two boiled quails eggs, nestled amongst hay! The creamy yolks paired nicely with the contrasting crunchies. 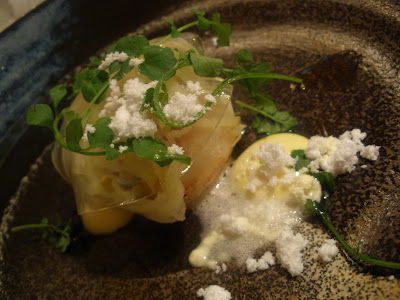 Onto the first course of Scottish dived scallops, which was actually quite disappointing. Aside from a perfectly respectably seared scallop, there was little taste from the accompanying grated apple and apple jelly that sat on top. I’m also increasingly wary of dishes with flavoured “snow”. What exactly are these meant to do? The miniscule granules of hazelnut beside the scallop were just that, granules. 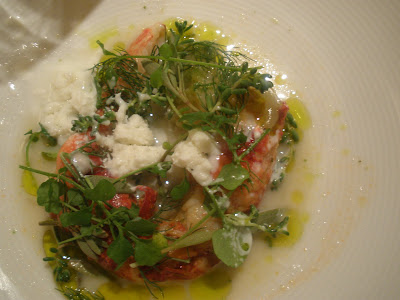 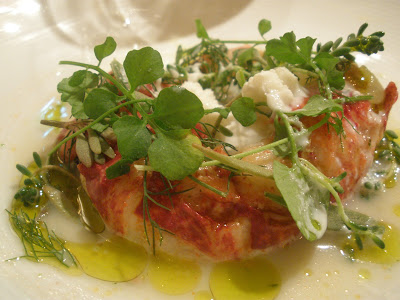 And then those talons emerged. Along came a coral lobster that was expertly cured, and cured in the way that the lobster still had a significant bite. A wreath of strong, almost medicinal herbs laid above and contrasted with the fishy morsel, with a creamy buttermilk dressing rounding the dish off. 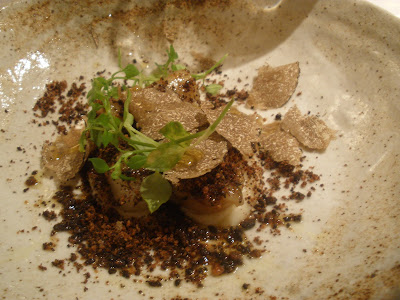 Next was a lively dish of Kent vegetables which consisted of creamy Jerusalem artichoke puree, surrounding pink fir potatoes and generously topped with shavings of black truffle. I’m not sure this was the most exciting dish, it really showed competency in cooking vegetables well rather than going beyond the norm which I suspect this restaurant is trying to achieve. 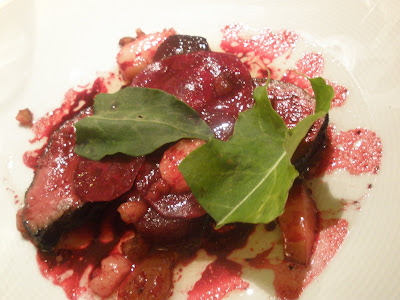 However, the clear high octane star was the Norfolk Deer Loin, bathed in a blood red beetroot dressing. Having being flavoured with burnt hay, it was the bonfire night of my dreams. Deer loin was marvellously tender, with a haunting smoky smell infiltrating the entire dish. Unctuous and squidgy, smoked bone marrow punctuated the meat in all the right places. 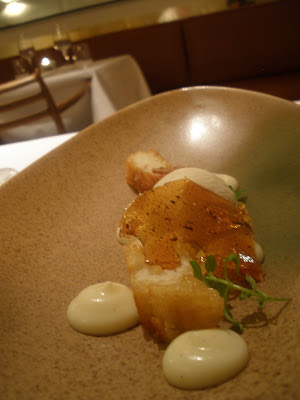 For dessert, deconstructed bread and butter pudding. Slightly reinvented, the custard and little crackers which was the “bread” exuded sensuous spices such as cardamom, star anise and cinnamon. Great texture from the sugar shard that stood upright and had flecks of pretty spices.

Some teething problems were evident in the soft opening of North Road. We felt slightly forgotten as they took their time in the beginning to find us and ask for drinks, and as pretentious as this sounds, our white wine wasn’t placed in a cooler. This is one to watch though, the simply named menu belies the sophisticated cooking, and the global influenced flavours really worked. Viajante, you may be basking in London restaurant splendour now, but I would keep an eye on this close competition. The tasting menu was £55 for 5 courses per person.
Posted by Hungry Female at 10:01 PM