C'est vrai! Fine French desserts have arrived in KL. Being the last person to have had Nathalie's macarons, expectations had been set high after hearing and reading so much about these pretty little things. 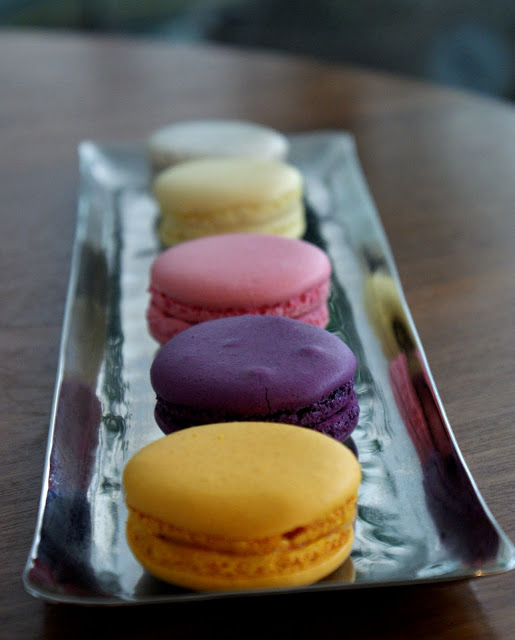 Who'd have guessed KL to be such a little hub for macarons? Well they are the patisserie du jour and after my second try of these meringue and sugar wonders (the first being the unforgettable truffle ones from Les Deux Garcons) I must say Malaysia's fine capital has gotten the hang of producing good quality macarons. My awe stems from the simple fact that being in Malaysia is like having a sauna-thon. Humidity is pastry's worst enemy so KL must be seeing a parallel surge in air-conditioning bills to cope with all this macaron-making. 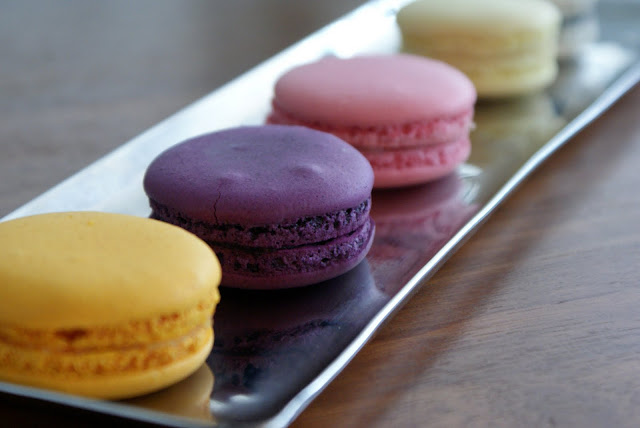 Aren't these vivid colours irresistable? Half the fun of having macarons is in making the choices: there are always small dilemmas around which flavours to have and lots of audible "mmmm-ing" even just from saying those delectable names. In the end good friend MY and me chose Passionfruit, Cassis & Violette, Rose & Lychee, Ginger and Black Sesame. 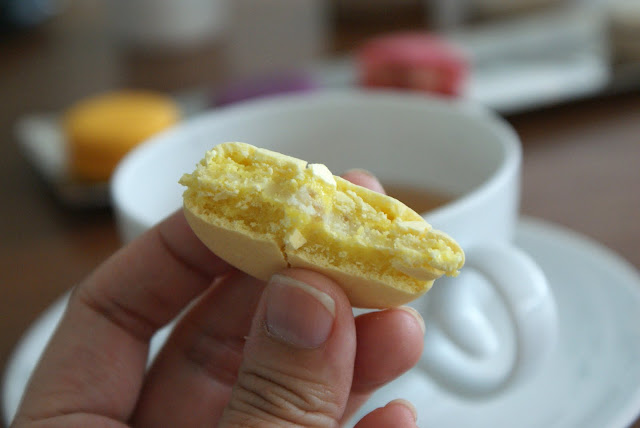 Immediately I tasted the fresh lychee in Rose & Lychee but the overwhelming scent from the rose was like eating handwash. Cassis & Violette was too jammy and flat in flavour. Thankfully Black Sesame and Passionfruit rectified the initial bump in the road, their flavours really pronounced in both biscuit and filling and I even caught a little glimpse of fresh passionfruit seed. The flavour of the day for me though was Ginger. Neither sharp nor faint, it was perfectly balanced and even slightly aromatic like a sophisticated ginger snap. 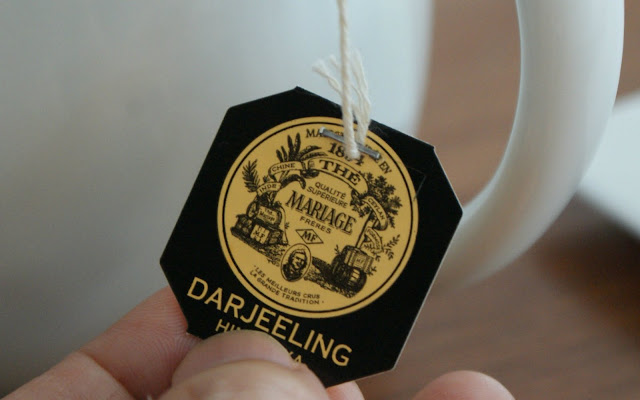 And whilst we munched and caught up on a year's worth of gossip, I noticed the distinctive label of famed French tea makers - Mariage Frere. Now this find was exciting - one of my favourite spots in Paris is a beautiful, dark and mysterious tea museum and shop where this little tea bag comes from. Mariage Frere has been making blends for ages - since 1854 so they say - and these are no ordinary blends. I remember being bowled over by Noel (their Christmas blend) spiced with cinnamon, berries and citrus; and opening tin after tin in the museum just to breathe in these delicious and creative smells. After this nice memory I was transported back to 2011 where the delicate and soothing swell of Darjeeling was the perfect foil to our sweet treats.
So while some flavours worked and others need tweaking these macarons are still worthy of the press they get. Crumbly and light, moist with almond cream fillings, I've found a little bit of France in KL. Add Mariage Frere to the equation and je vois la vie en rose.
Macarons at Nathalie's Gourmet Studio are RM4.40 each. There are also other French patisserie, a lunch and dinner service. Thank you MY for treating me to such a fun afternoon!
~Erratum~When I had first posted this, I erroneously called the Cassis & Violette macaron Cassis & Raspberry. This has now been corrected! (17th July 2011)
Nathalie's Gourmet Studio
Unit A4-1-5 Solaris Dutamas
Jalan Dutamas
50480 Kuala Lumpur
Tel: +60 (0)3 6207 9572

i've been afraid to research what's the calorie content for macarons. considering i can sometimes binge on a dozen in one sitting, it'd be awful to learn that they're 300 calories a piece or something :D

Not that high, you'll be pleased to know http://goo.gl/RBgiz ! When it comes to sweets the French have got it right, small and sinful. And you don't see many obese French peeps do you?!

Ah.. ginger.. never tried that flavour b4... did you try any of the food by any chance?

Cant wait for them to open the macaron bar in the city :)

Ginger is a fantastic flavour to have in a macaron! We didn't have time to have food but that's another thing I have to catch up on!

I was also excited when I saw they had Mariage Freres tea. It's a big favourite of mine. Ginger sounds like a new flavour. Must give it a try.