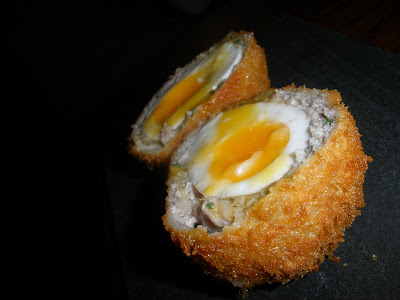 Oh hello there! Hello again to the most beautiful Scotch Egg I've ever seen. Hello to the Scotch Egg that changed my whole outlook on Scotch Eggs, the gastropub, what is British food and how the Prince of Wales gastropub on Upper Richmond Road should be a landmark for this small triumph alone. Have I made it absolutely clear that I'm obsessed with this Scotch Egg?

Before this experience, I held Scotch Eggs in the same regard as other English bits which are really popular but that I really detest. DETEST. Like trifle and rice pudding. Stodge that clots the arteries and gives me images of war time food. Previously, I wondered whether the eggs inside Scotch Eggs were actually real and not some weird hardened white and yellow gunk.

Enough about what I thought, I've now seen (and tasted) the light. Ordered by my fine friend who is a regular at this Putney establishment, when it arrived on black slate I knew I was in good hands. It had been freshly made, the outside was hardly the infamous thick floury crust but golden, crunchy and of single crumb thickness. The pork case was soft and spongy mince, mixed with herbs and reminiscent of Chinese dumpling filling. And finally its pierce de resistance: a perfectly soft boiled egg in the middle, sending me to self-saucing heaven. How did they make it soft boiled?!

From Nauseating Hatred to Raving Obsession, I've made a 180 degree turn on this humble snack. Call the restaurant, book a table and pre-order that egg. I predict a shortage soon.

The Prince of Wales' pub menu has the regulars: Beef Burgers, Steak, Roasts etc.. We also ate the fish and chips which was excellent (it's all in the details, their home made tartar sauce was generously caper-ed). There is also a restaurant menu which looks more bistro, average main courses are £13. Putney anyone?