Yes, indeed - sake tasting! This was the first ever I'd heard about and when the invite said "to be paired with certain types of Japanese food", I knew this was one for me. 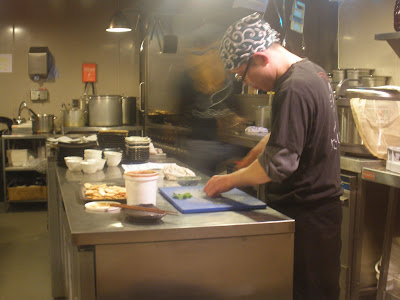 Tsuru restaurant is based in Southwark and at a stone's throw away from the Tate Modern. It could be easily passed off as one of those generic sushi places as it's nestled in between chain-stars like Leon and Starbucks. But it's far from it. Only 2 years old, it's proposition is organic and free range Japanese food, serving lunch by day and occasionally tasting venue by night.
This night was hosted by Wakana Omija, a sake expert from the Akashi-Tai Sake Brewery, claiming "some of the sake tonight was made by my own bare hands!". A warm and engaging host, she explained that sake is essentially fermented rice and then refined into a liqour. Often drunk it short amounts, it's to calm and soothe you after a long day at work. 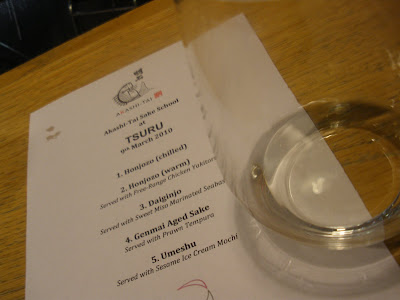 There were 4 liqours to try with a food pairing:
1. Honjozo (served chilled)
2. Honjozo (served warm, with Free Range Chicken Yakitori)
3. Daiginjo (served with Miso Marinated Seabass)
4. Umeshu (served with Sesame Ice Cream Mochi)
Honjozo is the type of sake one would be acquainted with at sushi bars. It's your clear, grainy and wholesome sake that warms but never burns the throat. Makes you feel all mellow inside. I think it was served chilled and warm to illustrate that different temperatures can invoke different moods - chilled was expectedly more refreshing and sweeter.
According to Wakana, the more "polished" the rice grain, the more refined the sake. And whether or not you use white or brown rice, has an effect on colour and taste. Akin to white and red wine? Hmmm. Daiginjo was then a "golden" sake made from brown rice, that particular one had been aged 8 years. I would liken it to a sweet sherry and went down nicely with a marinated oily seabass served on a rice cracker. 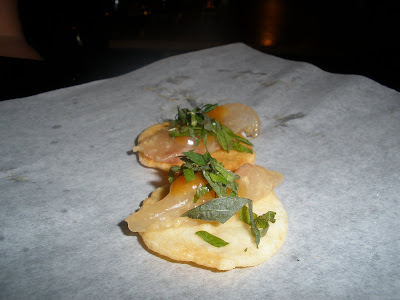 The fourth liqour was not a sake but an umeshu, a plum liqour. Have to say I was not a huge fan of that in itself, far too much like plum syrup. The sesame mochi was however divine! A sesame ice cream ball, rolled in black and white sesame seeds was delightful, light and held it shape without an overly glutinous casing. 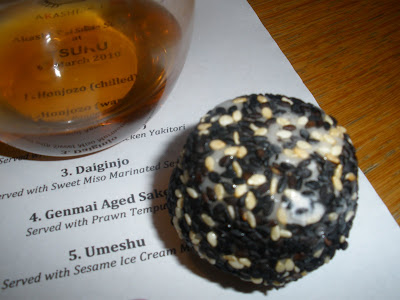 Being impressed with the sake and food, we stayed to pillage the menu. It wasn't actually very varied, but what we did order and try was satisfyingly good. 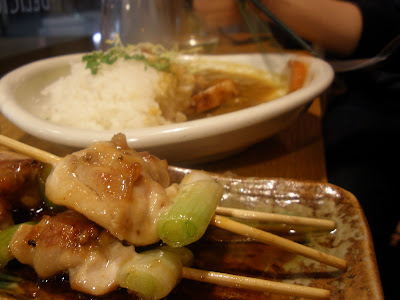 What you must try: any of the chicken dishes! Chicken yakitori skewers were nicely browned and bathed in yakitori sauce. Chicken kare-age was superbly crispy, fried but light on the outside and extremely tender upon bite. Something that was a complete revelation to me were the fried chicken skin skewers. Not sure of it's actual Japanese name here but it literally is chicken crackling on a skewer. What a BRILLIANT idea! 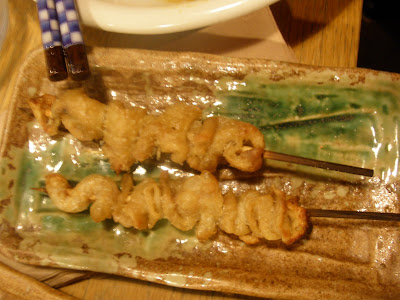 And of course, the sashimi. Wow. Makes me wanna burst into song like those kids in Glee. I stop myself from using the over-used "melt-in-your-mouth" phrase, but it sure does fall apart nicely when I press my tongue against it. 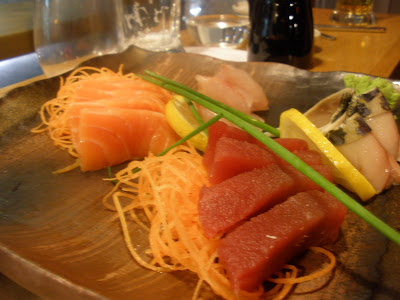 I would definitely recommend Tsuru if you're in the neighbourhood. Whilst it only does a cross section of Japanese food, I applaud its quality and wholesome food mission. I thought the tasting was well presented and the food pairings were good choices for the drinks.
The tasting, including food pairings were £18 per head, and all other food (circa 8 dishes amongst 4) was another £16.
Posted by Hungry Female at 12:18 AM