No need to list reasons why one would not venture into Deptford for well, anything. Unless of course one worked round the corner in Greenwich and was offered the chance of a lunch adventure to the local Vietnamese by a foodie colleague. Whilst Deptford is generally an adventure black hole it is strangely home to some quality and destination Vietnamese restaurants, the best known one in the area being Café East.
Colleague S seemed to have uncovered a little gem. Le Gia was very no-frills, harshly stark in fact and we were the only customers at that lunchtime service. Only. Which could have been slightly eerie but S AKA Tomatoes and Radio Wire and I were not once short of food stories to exchange. I always appreciate a spirited companion that is game for good food no matter the surroundings.
Though we were provided with what looked like an ample menu, we still lunged forward at Beef Pho Bo each and Beef Summer Rolls. Yes this was very one-track minded but S here needed an iron shot after giving blood the day before. And when it was this good, gimme that iron! 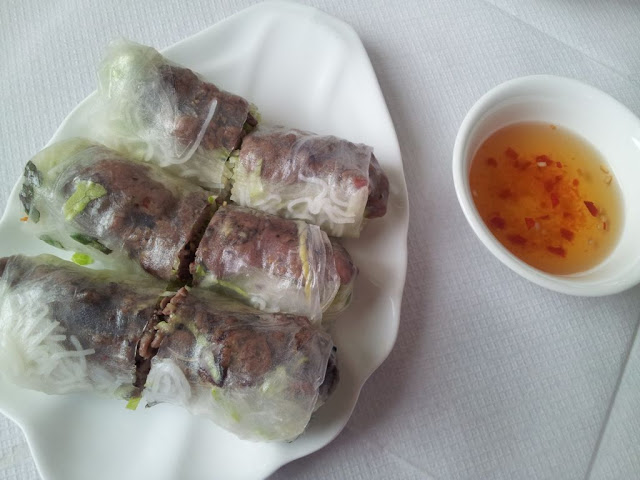 Summer Rolls were succulent, charred and beautifully sweet and crisp and not wrapped with too much skin that it might knock you dead if one hit you in the head. We noticed in particular how the dipping sauce was just on the right side of salty fish. Often places make them too sugary, ruining that balance of spicy and sour. 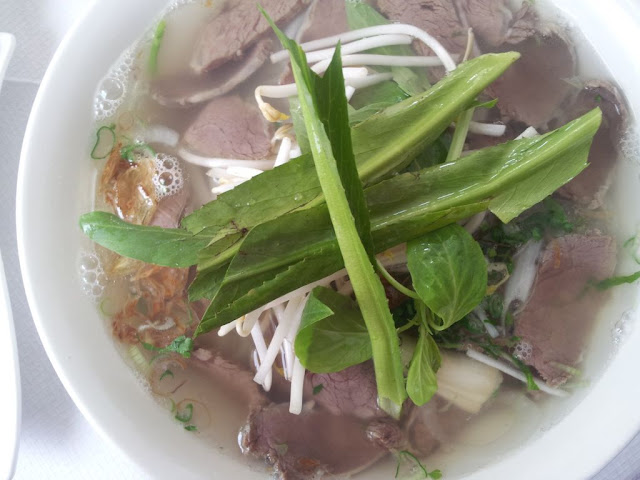 We marveled at how the Pho broth was as brilliantly clear as a fictitional English day and to borrow S’s phrase, well-rounded with flavour. Silky noodles and just-pink beef slices created a nourishing bowl of warmth. Perfect in this dismal weather of late.
If you’re willing to make the detour for Café East (probably for dinner) and if those bites were anything to go by then Le Gia would be far from a wasted journey. Two Beef Pho Bo’s and shared summer rolls were GBP18.50. Definitely heading back to try more of their noodle dishes and the sandwich du jour which even Eat is now offering: Banh Mi!
Le Gia
41-42 Deptford Broadway
Deptford
London SE8 4PH

Posted by Hungry Female at 2:36 PM

bahn mi! getting a good one in KL is almost as difficult as trying to find a 100-ringgit note that someone might have dropped on the ground :D

Where would you say was better? Le Gia or Cafe East? Thing is I was a bit disappointed by my trip to Cafe East. The banh cuon was good, but the bun bo hue and the summer rolls were pretty poor.

Sean: I was actually SO surprised not to find any Banh Mi in KL, despite us being just south of it's origin! Good bread is a hard gig in our humidity tho.
Mr Noodles: I stand by Le Gia's Pho Bo and Beef Summer Rolls. Haven't had better in a LONG time.

Yes! A joyous find. Have been twice now - oddly both times I was the only person there. Lovely pho (although I preferred Cafe East's - but still it was like yours, wonderfully clear) and lovely rolls.

Going With My Gut said...

Secondly, am ever on a quest for a properly made bowl of pho. Sounds like this joint warrants investigation (I'm with Mr Noodles re: Cafe East).

Next time your in Greenwich we're going here!