Whilst the World is still fixated on sweaty men chasing that "roundest" Adidas Jabulani, it's also the season for two of London's oldest sporting traditions. Namely, Ascot and Wimbledon. Sounds like Champagne O'Clock to me. Pink bubbles are synonymous with these two events; mainly for seasonality and secondly, the obvious feminine appeal. Interestingly, this week I learnt that Pink Champagne's popularity amongst women has alot to do with when it actually appeared on the market. Following the Second World War, and the feminist movement, women started working more, and earning more. Whilst the seductive colour attributed to the initial novelty, it was the women's earning power that led and sustained higher sales of the pretty stuff. These days it's not only attractive, but an elegant partner to many fruit based desserts.

Bluebird's wine cellar on Chelsea's King's Road does an excellent job in organising wine tastings, in particular for Champagne. Lanson was the house of choice this time, and we were treated to four styles, with Chocolate Dipped Strawberries and Strawberry Tartlets to match. 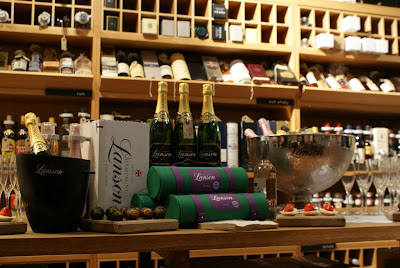 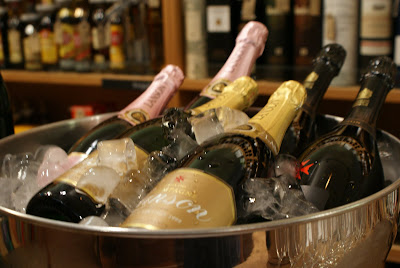 First up: Lanson's most popular, the Black Label. The perfect aperitif, it's rounded, refreshing and you feel you could drink quite a few of these before looking like Diego Maradona on crack. 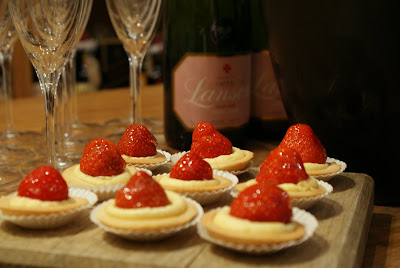 Second: Lanson's Pink Label or Rose Champagne. The Lanson representative pointed out the drink's distinctive salmon hue, compared to the more common pink. This results from less sugar being used during the making, that also contributes to the raspberry and red berry notes on the nose and palate. Strawberries and pink champagne is such a timeless partnership. 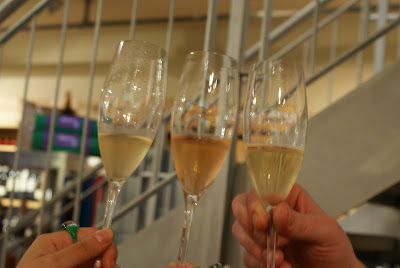 Left to right: Black Label, Rose, Gold Label
Third: Gold Label. This was a 1999 Vintage, which compared to the Black, had a bigger punch. It had characteristics which I love in white wines: nutty, biscuity, full bodied. We were told to look for a fine mousse; if a vintage has bubbles which feel even and of pin-head size on your tongue, that's a sign of quality.

Fourth: Extra Age or Demi Sec. It was a first for me in trying this style, which is meant to be slightly sweeter and better when pairing with desserts. Gentler than the Rose, and not as powerful following the vintage. Not to my personal taste, but of course I didn't turn down a top-up. 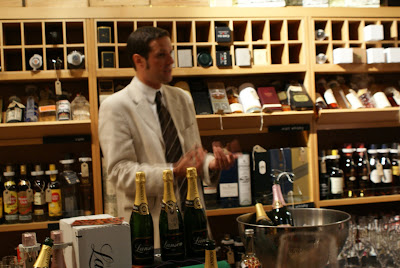 Our host Enguerrand Baijot (try saying that first name!), was super charming and sensationally French. As expected, a flair and pride for describing the product and process, as well as patiently answering questions. For £10 a head, which you can redeem against your purchases on the night, this is one of the best value for money tastings you can do in London. Bluebird houses many a household and speciality name, it's always an adventure to visit its Aladdin's Cave of tipples. Click here to see a list of their tastings. A Sante!
Posted by Hungry Female at 3:47 PM