Make way! Make way! Hungry Female has found a Malaysian restaurant to try and she will be as brutally judgemental as your mother-in-law's tongue on a bad day. Malaysians far away from home crave their home delights with much fervour and passion, so when someone says such-and-such restaurant does say, a great Nasi Lemak, it's a miserably cruel anti-climax if it's not true. Therefore my scepticism is out of real hope that this won't be a total washout. Sedap is the Malay word for "tasty", so this little joint based between Old Street and Moorgate better deliver the goods. 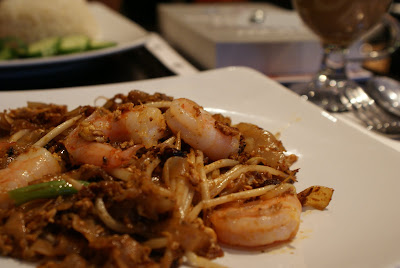 I order my all time favourite and benchmark for trying Malaysian food, Char Kuey Teow. For those not familiar, flat rice noodles are fried with ingredients including onions, garlic, shrimp paste or belacan, chinese chives, dark and light soy sauce. Egg is often added to this, and the combination of charred egg with all of the above gives it a salty, burnt and edgy euphoria that only fried noodles cooked in the right way can achieve. Sometimes cockles are added, giving a slightly bitter and complementary element.

Sedap's version of Penang Char Kuey Teow passed the test. Not euphoric, but rather good. Enough to get a respectable 7 out of 10. I was pleased that the waitress asked if I wanted it extra spicy, which I did, and that the prawns that came with were juicy and luscious like prawns should be. What would bring it up to a 10 would be more charred-ness, oomph from more belacan and as random as it sounds, more abandon in the presentation. Char Kuey Teow is not meant to look pretty (the prawns were arranged carefully on top, as if to show their generosity in giving me exactly four prawns), it's meant to be dolloped on a plate with proud intent and boom boom pow. 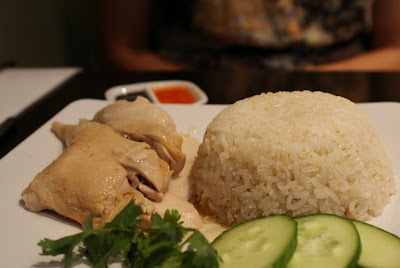 Best friend M's chicken rice again passed the minimum standards (rice cooked in chicken stock, tender poached chicken pieces) but what really killed it for me was the amount of chilli sauce that accompanied it. Practically a teaspoon full, if you're a chilli fan like me, you'd need to brazenly ask for more (and more) to finish the meal. 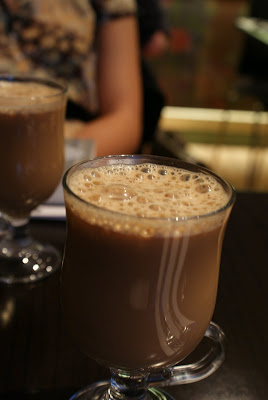 Teh tarik, I absolutely adore this spiced tea which is brewed with cinnamon, cardamom, star anise and cloves, then frothed up with condensed milk, creating a thick and comforting beverage that suits a variety of Malaysian dishes so well. My only niggle was a suspicious honey aroma from Sedap's version, that's not part of the usual mix?!

A mixed review for Sedap: the dishes are good, but in that they just seem to "make it", and for some reason I get the impression that's probably the best they can do. Maybe it's the overly measured-ness for food that is in essence without finesse. As a Malaysian would say, "Boleh Tahan-lah"*. I wouldn't rush back, but would bear it in mind if I was in the area. At £10 a head, it won't break the bank and I'll hush the mother-in-law in me for now.

Posted by Hungry Female at 1:18 PM